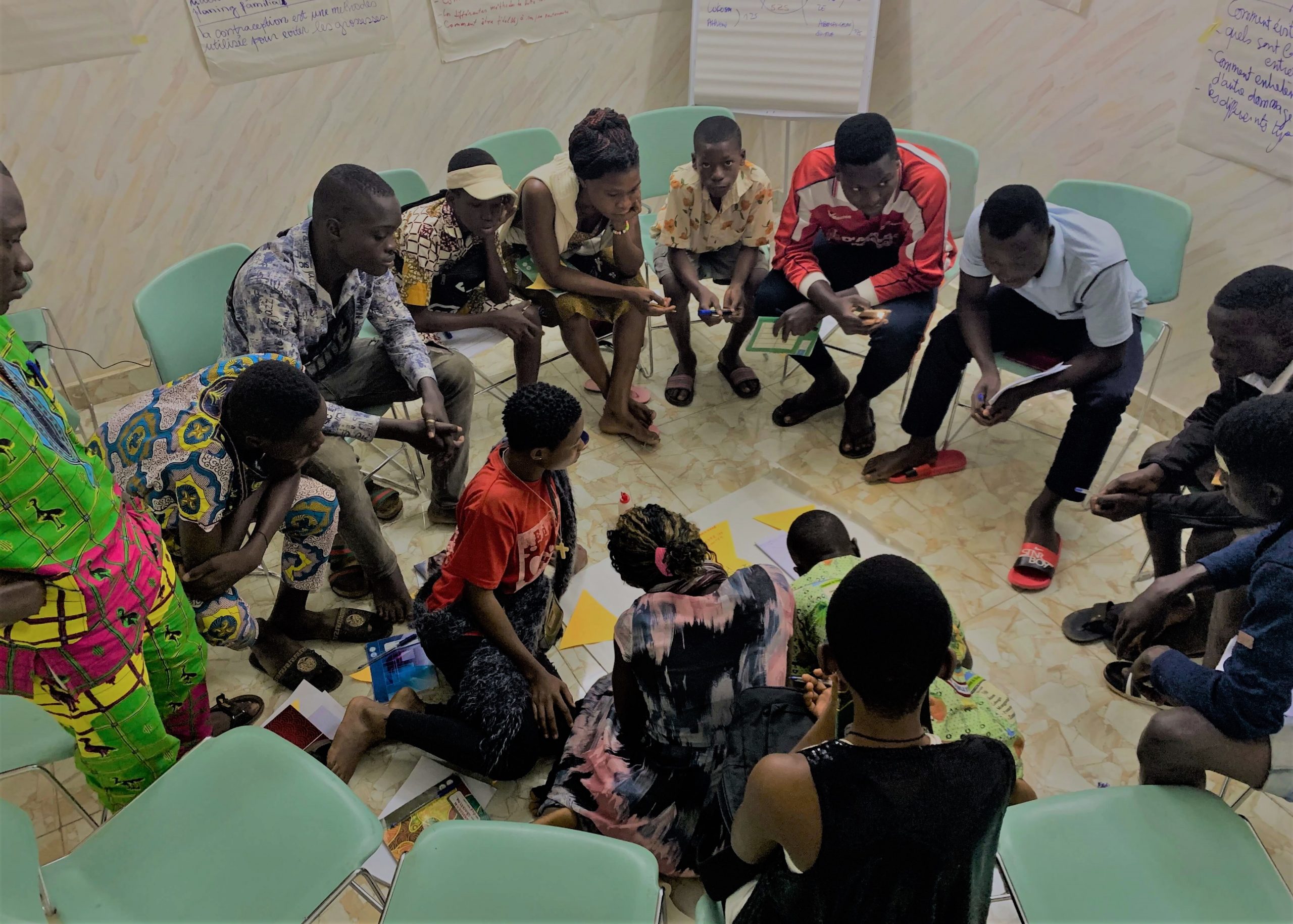 From Quebec to Benin to accompany teens in their sexuality

Four years. That’s how long it took to address the taboo of adolescent sexual health in Benin. Focus on an international cooperation project initiated by Santé Monde, a non-profit organization based in Quebec City.

– A text by Émilie Pelletier, first published in Le Soleil on November 14, 2021.

A high incidence of early pregnancy, numerous sexually transmitted and blood-borne infections (STBI) and very little use of contraceptive methods: these are Santé Monde’s main concerns regarding the sexuality of Benin’s adolescents.

“It’s a serious need, we can see it,” says Camille Marcotte. She is the coordinator of the PASSRELLE project, which aims to improve the sexual and reproductive health of 100,000 adolescent girls between the ages of 15 and 19. Camille began her mission in Benin in 2018. Recently back in Quebec City, she is taking stock of the Global Affairs Canada-funded initiative, as it is set to end next March.

By landing in this West African country, the international co-development organization Santé Monde wanted to strengthen not only the supply, but also the demand for sexual health care services in the Atlantic and Mono departments.

The Beninese Ministry of Health was open to the idea, and the 35-year-old organization seized the opportunity to develop PASSRELLE with local authorities.

“Health services were not being used as a preventive measure for adolescent girls. It wasn’t easy [for them] to get information and their rights were not being upheld,” says Hortense Lokossou, gender equality and human rights officer for the PASSRELLE project.

The objective was therefore to “remove the barriers” that prevented young people from accessing quality services. To get closer to them, their “key” population.

Halfway between a youth center and a community health center, PASSRELLE set up Teen-Friendly Centers in eight of the 14 municipalities. With play areas, a pharmacy, a digital room, listening rooms and a treatment room, the centers are equipped to attract a teenage clientele. Staff have been trained to answer girls’ questions, and health training has been offered to meet their needs.

Often reluctant to seek help “for fear of being judged”, adolescent girls tended to underutilize the services available to them. The PASSRELLE project has changed that, say Camille and Hortense.

“We did awareness-raising activities and we saw the change in behavior,” Hortense says.

A pandemic that shakes things up

Then the pandemic happened.

“The needs didn’t change that much, knowing that the reality in Benin was different than in Canada,” since there was no lockdown, explains Camille. “It was pretty much normal life.”

However, “resources previously allocated to youth health were allocated to the pandemic response,” she says. As a result, the supply of services decreased and negotiations had to take place to ensure that the authorities continued to invest in sexual and reproductive health. An “important” issue, but one that was suddenly put on the back burner. With the COVID-19 crisis, the Canadian government granted an additional $1 million to Santé Monde to continue the work begun in Benin until March 2022.

Globally, the pandemic has had a significant impact on women’s health, with cases of domestic violence on the rise, access to contraceptives restricted and testing for STIs discontinued. According to the United Nations Sexual and Reproductive Health Agency (UNFPA), an additional 1.4 million unintended pregnancies are estimated to have occurred due to interruptions in access to contraceptives among 12 million women after one year of the pandemic.

In Benin, the assistance provided by PASSRELLE, coupled with the fact that adolescents stayed home more during the pandemic, helped avert the disaster.

However, “we could see that there was a reluctance to go to the health services, they were not frequented as much, because [some] saw them as potential sources of contamination. We had to deconstruct that perception.”

Through the presence of its workers and its daily support to the Beninese teams, Santé Monde has helped change mentalities and habits regarding the sexual health of adolescents. It is now possible there to prevent, and not just to cure.

On the eve of leaving for other missions in collaboration with other countries in the world, there is only one wish left, says Camille.

The wish for continuity.

“The actions can continue. The government ministry must be able to maintain the momentum so that there is no relapse,” she says, although she acknowledges that “we cannot expect everything to stay” in place.

She is hopeful. “Many of the actors we’ve been working with are there to press the health authorities. Our partners have shown us that this is important to them. If they weren’t interested, of course it wouldn’t be sustainable.”

Although there are no figures on attendance at the Teen-Friendly Centers yet, Santé Monde considers this to be mission accomplished.

“We can see the results [of our actions] when local actors take them in their own hands and it becomes their project, their own pride,” the two women conclude.

And it’s not over yet.

“It would be just as relevant to have this kind of intervention elsewhere in the world,” they say.